AT THE CORNER OF BURN STREET IN DARVEL

Last Friday, Yukki and I flew out with my Dad to Scotland, his homeland.

At our arrival at Glasgow Airport we rented a car for the week.

My father was so happy to meet up again with James, his brother.

Sunday morning we all four joined the service at Covenant Church in Darvel. (Darvel is the small town where Alexander Fleming, who discovered penicillin, was born).

It was in 1958 in Darvel (after 3 years in the army) that my Dad’s life was forever changed. He met at the corner of Burn Street a young Christian girl by the name of Georgina. She invited him to a church service on the other side of the street. That is where Dad met up with a young man, he knew years ago. A tough guy who used to beat people up. He was now converted, dressed in a WEC uniform and about to leave for mission work in Brazil. My Dad could not believe his eyes. That day became the turning point in his Christian life. He soon signed up for WEC Missionary Training College in Glasgow where he responded to God’s call to serve in France.

Tomorrow we will take Papa to see Georgina. It was in that same house that my Mum and Dad met for the very first time!

Yesterday, we drove all the way to Kilcreggan, a village by the sea where every two years in the Summer my brother and I, when young boys, would go with our parents to WEC’s Holiday Center…

Dad is speaking today at the WEC Prayer Meeting in Glasgow. He will be meeting up with friends he has not seen for years… 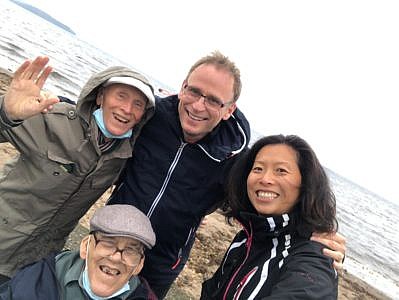 Timothée Paton was born in the volcano region of Central France to Scottish and English missionary parents. At the age of 4, he gave his life to Jesus...